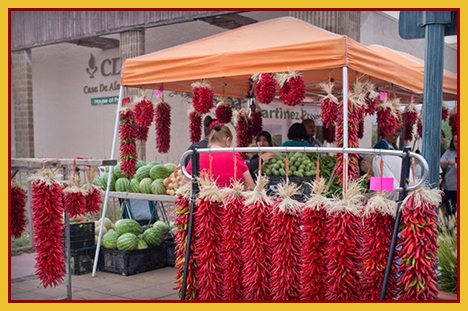 The Farmers and Crafts Market of Las Cruces began in the summer of 1971 with a gathering of local farmers selling their produce. Soon, homemade bread was added, and local crafters and artists began joining the farmers at the Market. Early supporters of the Market included the Downtown Merchants Association, the NMSU Extension Office, the League of Women Voters, and the City of Las Cruces Parks and Recreation Department. The Market was situated under the metal awnings that covered the “Yellow Brick Road”, a pedestrian walkway through Main Street.

By 1981, City ordinance designated the Las Cruces Parks and Recreation Board to oversee then Market. A committee of vendors was elected to govern day-to-day operations. In 1999, the City of Las Cruces accepted management responsibility for the Las Cruces Farmers and Crafts Market and appointed a Market Manager.

Las Cruces Downtown Revitalization brought changes as the metal awnings were torn down and the city began an ambitious plan to reopen Main Street. Since 2009, Market vendors have been relocated to the seven full blocks of Downtown Main Street. With this expansion, the Market flowered with its now-familiar colorful canopies and open spaces for gatherings and entertainment.

The Market celebrated its 40th anniversary in 2011, and was named “Number One Large Farmers Market in the Nation” in America’s Farmland Trust’s 2011 prestigious nationwide poll.